In the southern United States, grits are a popular dish. People commonly define grits as cornmeal made from cooked hominy. Grits include dried, crushed maize simmered in various liquids, including water, broth, or milk, until it reaches a thick, creamy soup consistency. So can vegans eat grits?

Grits are vegan-friendly and used in a variety of ways. Furthermore, it does not include any animal products in the preparing phase. Many delicious vegan products commonly include grits.

Vegan grits are perfect for a quick and simple lunch or dinner. Individuals mostly have them with vegetables like collard greens, black-eyed peas, or okra.

Look for a label that states cornmeal grits or polenta, which are the same thing when purchasing packaged grits. Both grits and polenta consist of ground corn.

However, the distinction lies in the variety of maize used. Polenta is prepared from yellow corn, as you can imagine from the color, whereas white maize or hominy makes grits.

Grits are a Native American porridge prepared from stone-ground maize boiled in water. Furthermore, it is dried corn kernels that have been treated with an alkali to remove the hull and germ before being processed into cornmeal.

When early European colonists saw Native Americans preparing grits, they recognized it as a familiar dish, a type of grain cereal that was common in many other agricultural areas.

On the other hand, grits are a traditional Native American cuisine prepared from crushed or ground maize or corn and a staple Native American dinner. They are usually eaten for breakfast or as a side dish.

Additionally, they consist of a kind of corn called dent corn. Dent corn has a softer and sticky kernel. Crushed maize or corn granules are often cooked in water, milk, or broth until they become a thick, creamy consistency similar to porridge.

Grits taste like corn, but they’re often light and serve as a filler for other flavors to shine through. On the other hand, stone-ground grits have the most incredible taste.

Some claim yellow corn grits have a more prominent corn flavor, while white grits have a more delicate, subtle flavor. Additionally, instant grits and quick-cooking grits are finely ground and have the mildest flavor. 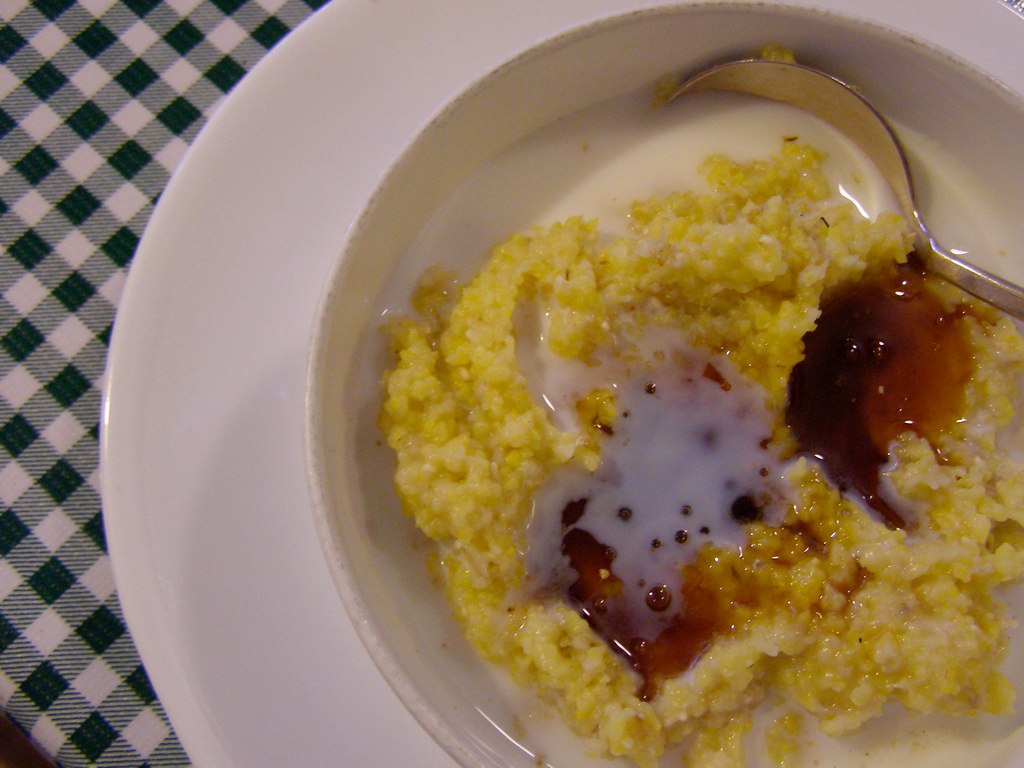 Yes, grits are vegan. You can eat them plain or create polenta chips, casseroles, and pancakes. The ingredients list of grits does not include animal products. This traditional Southern American meal includes crushed dried maize, which is high in iron and B vitamins.

Grits are a type of cuisine prepared from boiling cornmeal. Hominy grits are grits produced from hominy, which is maize treated with an alkali and the pericarp removed with the help of nixtamalization.

You can serve grits as a breakfast meal with a variety of flavorings. On the other hand, you can make grits creamier if you love to eat creamier grits and find them delicious. There are a variety of options available depending on your interests.

Because it has no animal products, they have a unique texture. During the gelatinization process, it vanishes. Hence, placing the starch molecules in the water and high heat, their intermolecular bonds break down, resulting in gelatinization.

In addition, more hydrogen bonding sites are exposed to water, resulting in a gel-like consistency. As a result, grit does not use any animal-derived ingredients.

Grits are an excellent and nutritious breakfast that takes only a few minutes to prepare. How you season your grits determines how healthy they are. Moreover, it is a high-iron, B-vitamin-rich traditional Native American meal made from crushed, dried maize.

You can service grits with high-calorie toppings, despite the fact that they are relatively healthy. Grits are known for their high iron content, which is necessary for the production of red blood cells.

Many B vitamins are present, including thiamine and folate, as well as trace amounts of pantothenic acid, potassium, Vitamin E, and calcium.

When compared to oatmeal, grits include higher micronutrients such as potassium, calcium, and vitamin. Grits are high in iron, which helps prevent the onset of iron deficiency anemia, which is more frequent in the elderly.

They also include a lot of folates, which might cause vitamin deficiency anemia if you do not get enough of it. On the other hand, regular corn kernels contain fewer vitamins and minerals, such as vitamins A and C and calcium, than stone-ground corn kernels.

On the other hand, grits go through many stages when processed. These stages include removing nutritional components of the corn, such as the pericarp and germ.

Mainly, individuals serve grits with high-calorie additions, even though they are pretty healthy. You can use kale, mushrooms, green squash, and you can also use whatever veggies you have on hand. On the other hand, corn, carrots, and broccoli are other excellent choices.

Almost all plain grits are suitable for vegan consumption. Hominy corn and vitamin fortification are both included in ordinary produced pre-packaged grits.

Grits include plant-based materials, making them vegan-friendly. This crushed maize resembles polenta. However, they are smaller and have a different feel.

On the other hand, many grits recipes use a lot of butter, cream, and cheese. However, preparing delicious grit without dairy is easy. Vegan grits are also abundantly available in the market.

Just keep in mind that the straightforward and conventional varieties are the ones that are most likely to be vegan. Before purchasing anything, always double-check the label.

If you do not like store-bought grits, you can also make your own grits at home. Grits is, without a doubt, a must-try vegan recipe. Its buttery and delicate texture will make you keep craving for more.