What Foods Have High Caloric Density

If you’re trying to lose weight or gain weight, for that matter, you’ve probably come across the term caloric density. Certain foods simply have more calories as per their weight than others. So what foods have high caloric density? The concept of caloric density can be an effective approach to eating healthy and maintaining a healthy weight. If you know which foods have a higher caloric density, you can limit or avoid them to help shed those extra pounds without ever starving yourself.

Caloric density is also related to nutrient density, which is a little different. However, both concepts can help you distinguish between which foods are healthy and which aren’t. It’s not just about whether you’re eating plant-based or not, as certain plant-based foods can also have a higher caloric density.

What is Caloric Density?

Caloric density or simply calorie density is the number of calories in a unit weight of the food. This is normally represented as calories per pound (or 3.5 ounces/100 gram).

A high caloric density refers to foods with more calories per pound, whereas low caloric density foods have relatively lower calories for the same weight or volume. For instance, a bar of chocolate that weighs 100 g has around 530 calories, whereas 100 g of broccoli only has 34 calories.

What this means is that chocolate packs in more energy or calories per 100 g than broccoli or any other vegetable, for that matter. While you’re technically consuming the same amount of both foods, you’re getting way too many calories with chocolate.

Now, foods that have lower caloric density don’t necessarily have a low number of nutrients, as nutrients are also measured in grams. Plant-based whole foods like whole grains, vegetables, fruits, and legumes are a good example of nutrient-dense foods. Conversely, they can also be treated as low caloric density food.

Think of it as two plates full of food: one with high caloric/low nutrient density and the other with low caloric/high nutrient density food. You might feel satiated with both the plates, but the latter gives you fewer calories but all the nutrients you need to get through the day. On the other hand, the first plate may give you ample calories but not necessarily all the nutrients you need to stay healthy.

High caloric density foods, for this reason, often result in weight gain and creating certain nutrient deficiencies. They don’t necessarily fill you up, and as a result, you want more food, which means even more calories. In contrast, high nutrient dense or low caloric dense foods keep you filled even with a small amount or portion.

What Foods Have High Caloric Density?

These are some of the high caloric density foods:

Sweets are perhaps the densest in terms of calories. Even the smallest of sweets packs in ample calories to substitute for a quarter or third of your meal plate. This is simply because sweets, candies, and even chocolates feature refined sugars, which are the real culprit behind all those extra calories.

Processed foods and fast foods are known for being healthy because they simply contain too many calories in a single meal than you need. These foods have played a major role in the obesity epidemic in the country by giving more calories and fewer nutrients to consumers. This doesn’t just encompass the traditional processed foods, but even plant-based processed foods, which should be minimized or avoided altogether. Chips are one of the most common snacks that almost every household consumes. However, they are highly dense in calories and never really help you up. Plus, they contain so much oil, which only adds to the number of calories.

Even a tablespoon of oil can traditionally have a lot of calories. However, the number of calories varies by the kind of oil. Olive oil, which is a healthy oil per se, has a lot of calories than, say, coconut oil or sunflower oil. So if you’re trying to go with low caloric density foods, you have to say adieu to oils, even the healthier kinds.

Again, the sugar in the sugary drinks adds way too many calories than you need. It doesn’t give you any health benefit, rather all those extra calories end up as fat in your body. This may also include certain fruit juices, especially those that have added sugars and hardly contain any fiber.

White rice and pasta ranges can be considered fairly caloric dense. These are processed and are predominantly rich in carbs. As compared with a low caloric density brown rice and whole wheat pasta, these pack in more calories and more carbs per 100 g.

The common thinking is that if a food has high caloric density, it’s unhealthy. That’s not necessarily true as certain healthy foods with scientifically proven health benefits also have a high-calorie density. Nuts are the primary example of high-calorie foods that are also healthy. Just a quarter cup or one ounce of almonds have over 160 calories. This is mainly because nuts contain good fats. While they are good, they certainly increase the amount of energy per serving.

This is why even though nuts are healthy, one should eat them proportionately. They are easy to overeat, which can result in weight gain. However, if that’s your goal, then that’s something entirely different.

Similarly, dried fruit is another healthy plant-based snack that also has a high caloric density. Since dried fruits have lost all their moisture, their sugars get concentrated and result in more calories per unit of weight. Just like nuts, it’s easier to over-consume them and gain weight. Raisins, for example, are small and easy to snack on, but too many of them may result in excess in your regular caloric intake.

Although vegetables and fruits are generally low caloric density, there are a few exceptions. For instance, avocados have a slightly higher caloric density. They contain healthy fats, just like nuts and olive oil, which results in more energy/calories. However, it’s perfectly healthy and contains some important vitamins and minerals.

Can You Lose Weight with Low Caloric Density Foods?

Low caloric density foods pack in the nutrients you need while keeping the calories low. This works out in your favor when you want to lose weight, simply because you’re able to keep your caloric intake low. It’s rather healthier as your calorie consumption is down, but not at the expense of important nutrients.

Low caloric foods can help address a lot of fundamental misconceptions regarding diet and weight loss. Rather than cutting out calories altogether, you need to cut out calorie-rich foods that put on weight. A 2016 study published in Nutrients studied the relation between low-energy-density foods and obesity. The researchers found a strong connection between these foods with low-calorie density and weight loss in participating obese individuals.

Dr. Michael Greger of NutritionFacts.org brilliantly explains the relationship between calories and obesity in this video.

It goes all the way back to the primitive tendencies that we tend to enjoy higher-calorie foods more. It’s more efficient per se, as you get more energy; however, it’s just not healthy.

Highly processed foods are at the top of the unhealthy, calorie-rich foods list. So avoiding those would automatically help you lose weight. Choosing low-calorie density foods will help you feel fuller even on a plate that’s low-calorie. This way, you get the necessary nutrients too, and don’t get any extra calories.

However, the caloric density approach isn’t that simple, as you have to pay attention to what you eat. You should know which foods are low-calorie and how much of them you should consume. On the other hand, a plant-based diet makes it incredibly easy, though, as you leave all those unhealthy high caloric density foods behind from the get-go.

As Forks Over Knives guide to Calorie Density Approach recommends, you should strike the right balance between hunger and satiety. You shouldn’t starve yourself to lose weight, and you obviously shouldn’t overeat even on low-calorie foods.

Similarly, sequencing your meals can also help with better weight management. It also recommends going with whole foods rather than liquifying calories (because of fiber!). I also love this infographic from Forks Over Knives which gives a great visual understanding of caloric density between foods. Check it out. 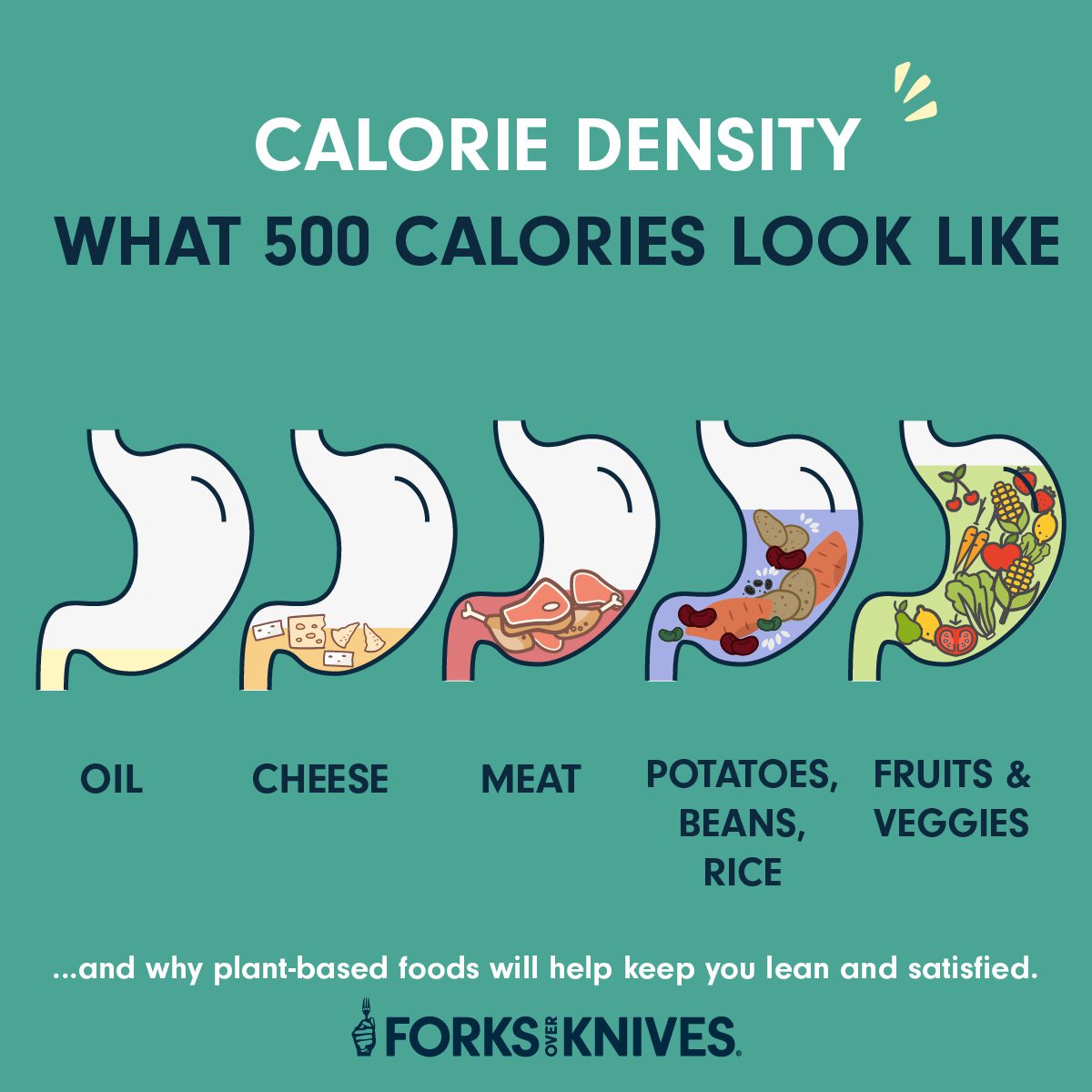 Snacks are some of the most highly processed and calorie-rich foods that pack in several hundred calories in just under 100 grams of weight. So if you’re trying to lose weight, you need to make healthier choices when it comes to snacks.

This goes to show that you can significantly reduce caloric intake by simply avoiding unhealthy, processed snacks. By choosing healthier snacks instead, like fruits, vegetable chips, and fresh popcorn, you can better manage your weight.

High-caloric density foods simply give you more calories than you need. Most of such foods are highly processed and don’t feel that filling. As a result, you end up eating even more of it, increasing calories even further. While anyone overweight or even at a healthy weight should limit or avoid high-calorie density foods, those struggling to gain weight may benefit from them. If you’re underweight and don’t seem to gain weight easily, you should consume high-caloric density foods, but only the healthier kinds. You don’t want to compromise your health for the sake of gaining weight and appearing bulky.

The common mistake around weight gain is that you simply overeat, and you’ll gain weight. While that may work in theory, it’s a double-edged sword in reality. If you’re consuming over 3000 calories of pure junk food every day, it’s not doing any wonders for your heart health or cholesterol.

If you really want to gain weight, go for calorie-rich foods that are healthy. We have already discussed several of such whole-food plant-based options. Snack on nuts every day and increase the servings. Add healthy fats to your meals, such as avocados and olive oil.

Now that you know what foods have high caloric density, you can easily make the distinction between what’s healthy and filling and what’s not. It’s fine to have such foods once in a while, such as sweets or confectionery desserts, but your main diet should revolve around whole-food plant-based foods if you want to live a healthier life with a healthy weight.

High caloric density, whether healthy or unhealthy, can result in weight gain pretty fast. And you can develop a tendency of overeating, which can increase the risk of obesity and all the terrible illnesses that come with it.