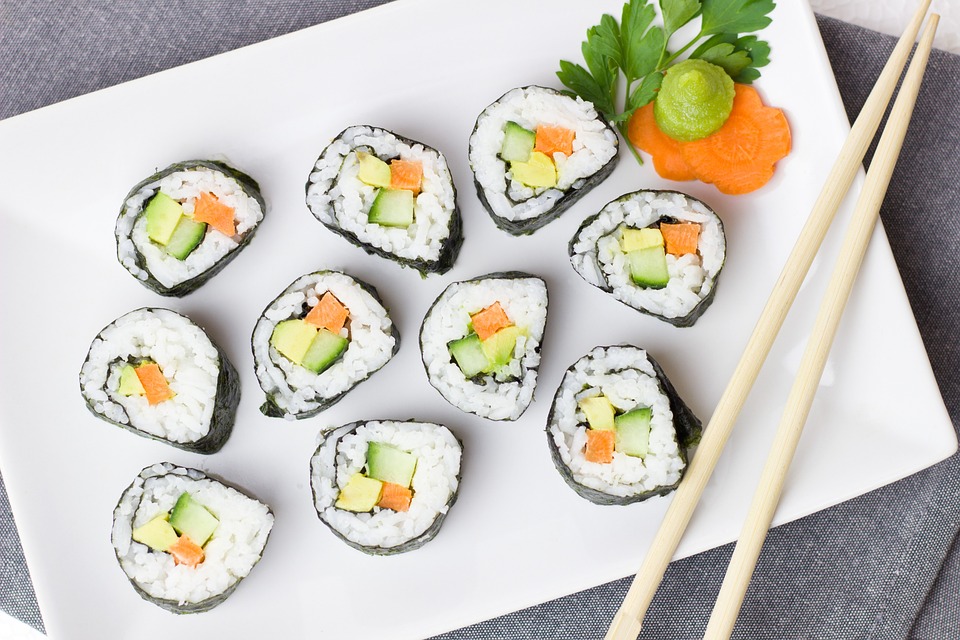 Sushi is a Japanese cuisine staple, almost synonymous with seafood, in general. That may make you wonder: can vegans eat sushi?

Sushi has been around for ages, with a history filled with folk tales and interesting facts. However, today, sushi can be found all over the world as a popular Asian, particularly Japanese, dish or snack. From Michelin star restaurants to truck stops, sushi is everywhere!

But that does not mean that vegans can readily eat any kind of sushi. Seafood is one of the main ingredients of different types of sushi. In fact, some types are made exclusively with raw seafood.

Sushi can be vegan as long as there’s no seafood or any other animal-derived ingredient in it. In fact, the literal definition of sushi is ‘cold rice dressed with vinegar’ that may be garnished with seafood or vegetables.

It’s actually the rice with vinegar (shari or sumeshi) that’s the main ingredient of sushi. Seafood found in most sushi varieties is basically a garnish, as per the definition. Of course, seafood does make it popular, and many varieties do indeed include seafood in it with or without vegetables.

Popular sushi, like maki rolls, California rolls, nigiri, and sashimi, are all non-vegan because they contain seafood like fish, shrimp, crab, or octopus. Sashimi contains just raw seafood on top of rice, so it cannot be vegan as traditionally there are no alternatives.

That all said, there are many varieties that vegans can enjoy that don’t contain seafood at all. Such sushi varieties, as you can guess, use vegetables as the garnish inside the roll of rice. Even the ones with nori (seaweed) and vegetables are vegan, again, as long as there are no animal-derived ingredients.

Most restaurants with sushi on their menu, especially those that specialize in sushi and other Asian foods, almost always have vegetarian and vegan options available. However, depending on the place you’re at, there might not be many options to choose from.

Some sushi varieties may also contain other animal-derived ingredients that are not meat but still not vegan like mayonnaise or cream cheese.

For some vegans, there’s also the fear of cross-contamination, but as sushi is not really cooked as such, the risk is almost non-existent.

Why seafood is off-limits for vegans is a whole another topic, but as far as veganism goes, any kinds of animal are not ethical for consumption, including marine life.

While most sushi varieties are non-vegan, there are vegan varieties as well made mainly from rice and vegetables. So the next question for conscientious vegans is whether it’s even healthy to eat sushi. Remember, veganism, particularly one that focuses on a whole-food plant-based diet, isn’t just about staying away from animal ingredients but actually eating healthy.

Since there’s just so much variety of sushi, there’s no definitive answer about sushi being healthy. Many ingredients individually offer unique benefits for health, while some ingredients pose threats. So really, it all just comes down to the particular sushi and its ingredients.

Generally speaking, though, white rice is the main ingredient of most sushi. While brown rice can be used, traditionally, white rice is the go-to for sushi because of its taste and texture. Although white rice is plant-based, it comes under refined carbs. That’s because most nutrients and fiber have been stripped off during processing.

Also, carbs mean calories, and not necessarily those good ones that are nutrient-dense. Furthermore, sometimes sugar is also used with rice to balance the flavor, which is another health red flag.

On the other hand, vinegar, which is used with rice, is good for you. Vegan sushi with nori would be relatively higher in protein because seaweed is rich in protein. All is not bad because sushi also contains a host of other ingredients. If we keep the vegan debate aside for a second, the fish and seafood in sushi have some benefits. For instance, fish is a good source of omega fatty acids, which are necessary for our bodies. However, there are myriads of health risks to eating raw seafood, so those can’t be ignored either (more on this later).

As far as vegan sushi is concerned, it’s largely safe if not incredibly healthy. Sushi containing vegetables like avocados, radishes, and cucumbers can impart the many benefits of these vegetables. Then again, they are in very little quantities, and mostly it’s rice.

As far as health concerns go, gluten is only bad for those with celiac disease who cannot eat gluten whatsoever. Others can safely consume things with gluten in them, including any varieties of sushi.

Is Sushi a Problem for Healthy Vegans? 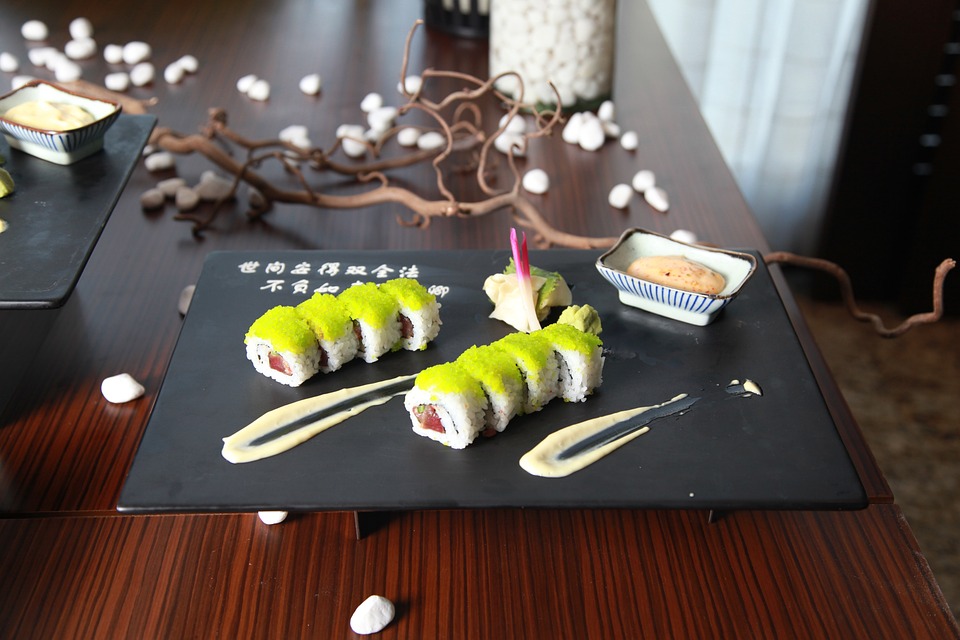 Now, despite sushi with seafood being non-vegan, vegans avoid it for many different reasons, mostly concerning health. These reasons should also technically worry non-vegans.

Although fish and other seafood have some beneficial nutrients that are backed by science, it’s also true that contamination is a big issue with marine life. Those risks double when you’re consuming fish or any other seafood raw, which is what the case is with most sushi rolls.

Raw fish can contain bacteria, viruses, or parasites that can be alarmingly dangerous for health. The most hazardous is anisakiasis, which is a parasitic disease caused by worms in raw fish.

There have been cases where people eating sushi have gotten infected with the parasite and gotten very ill. The British Medical Journal Case Reports reported such a case from Portugal, warning the public of the risks of eating raw fish.

Shellfish, in particular, is more prone to carrying contaminants because it lives in shallow waters that are more contaminated.

Then there’s the ever-growing risk of microplastics in marine life that are finding their way into human bodies through fish and other sea creatures. Several studies, according to Nature.com, have found microplastics in fish.

Microplastics pose long-term health risks for us, including cancer, as plastics contain carcinogens.

All of these health risks are serious red flags for vegans concerned for their health aside from the basic principles of veganism barring seafood from their diets.

For vegetarians, the vegan sushi options are suitable. However, some vegetarians that are pescatarians eat fish and other seafood. Those vegetarians only allow seafood as a source of protein, avoiding other forms of meat like chicken and beef. So such individuals can have virtually all varieties of sushi.

With vegetarians, it comes down to their personal preferences as there are different kinds of vegetarians. So if you’re an ethical vegetarian, it’s at your own discretion whether you want to consume vegan sushi or regular sushi with seafood in it.

Keep in mind the health risks just discussed above!

Wasabi is a green paste, served commonly with sushi, that comes from a plant native to Japan. But most wasabi served in restaurants and sold in markets is not real wasabi invented in Japan. It’s actually a horseradish paste made green with food coloring to resemble real wasabi.

Even the taste is somewhat similar, with the signature spiciness. So wasabi is mostly vegan as the ingredients used in even the not-so-real wasabi are all vegan.

When buying wasabi from a store, you may want to check the ingredients because, on rare occasions, the list may also have milk. Restaurants typically make their own wasabi, and it’s vegan, so you don’t really have to be worried about that. However, you can always double-check by confirming with the staff.

When enjoying your vegan sushi with wasabi, keep a lighter hand as wasabi is quite spicy.

Pro Tip: Take a pinch of wasabi and mix it in the soy sauce, then lightly dip the sushi in the sauce.

What Type of Sushi is Vegan?

If you want to eat sushi and are a vegan, all hope is not lost. There’s a decent range of vegan sushi options you can order in at a restaurant or try rolling at home.

When ordering in a restaurant, watch out for other animal-derived ingredients like fish sauce, which aren’t as common in sushi but may be used by some. You can always ask the server or cook whether the vegan varieties are, in fact, completely vegan.

Here are some of the best vegan sushi rolls to try: 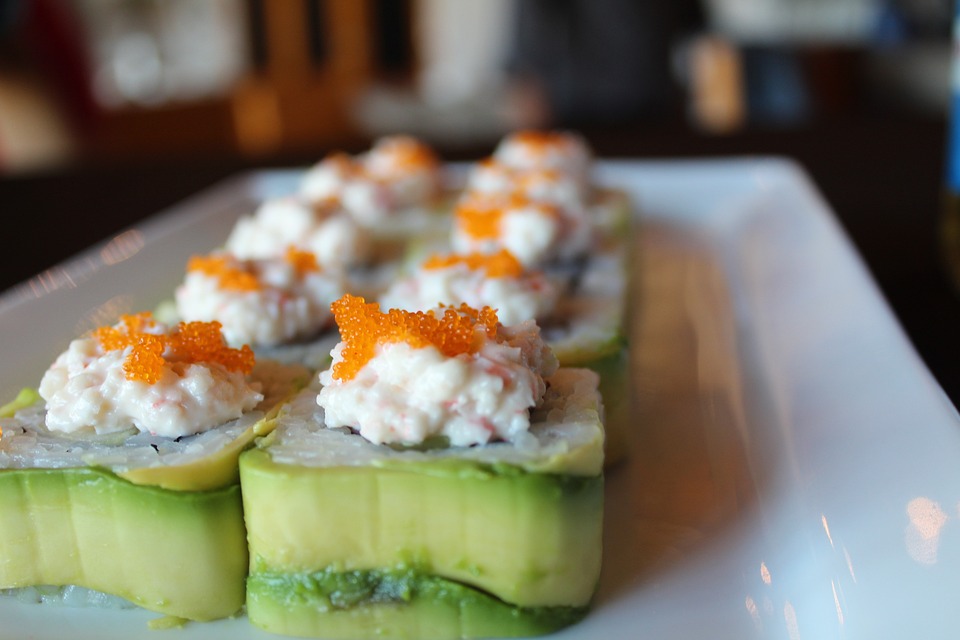 Avocado sushi rolls are quite simple as it involves rice, seaweed, and cubed avocado chunks in the center. When dipped in soy sauce and wasabi, the mild flavor of the avocado and the sweet sushi rice enhances even further, getting notes of sour and spice.

Avocados are quite dense with nutrients, so even those small chunks in the sushi rolls can give you a healthy dose of good fats, vitamins, and minerals. Of course, avocado sushi rolls also pack in some fiber as opposed to seafood sushi, which has virtually no fiber content.

If, as a vegan, you’re trying sushi for the first time, start with avocado rolls!

Cucumber rolls, as you can guess, contain cucumber slices in the middle, rolled with sticky vinegar rice. As opposed to seafood sushi or even avocado rolls, cucumber rolls are quite light, so you might not fill up on them so easily.

Many restaurants include these in sushi platters with others to add some crunchy variety. However, you can order a whole roll or ask them to include it in a vegan sushi platter.

As for the benefits of cucumbers, there are many. For instance, cucumbers can help lower blood sugar, so this sushi roll is a good choice for diabetic people.

Inari sushi or inarizushi is a little different from traditional sushi, but get this; it’s totally vegan!

It’s actually made of a tofu bean pouch filled with sushi rice and topped with vegetables. Even the pouch itself is seasoned and quite flavorful. It serves as a great protein alternative for seafood in sushi. The flavor profile and texture is quite diverse.

Make sure that the inari sushi you order is vegan because some restaurants also offer seafood containing inarizushi.

It gets the name caterpillar because it looks like a caterpillar on a plate. The rolled rice is topped with very thin slices of avocados, giving the roll a caterpillar-like green color. It looks good! 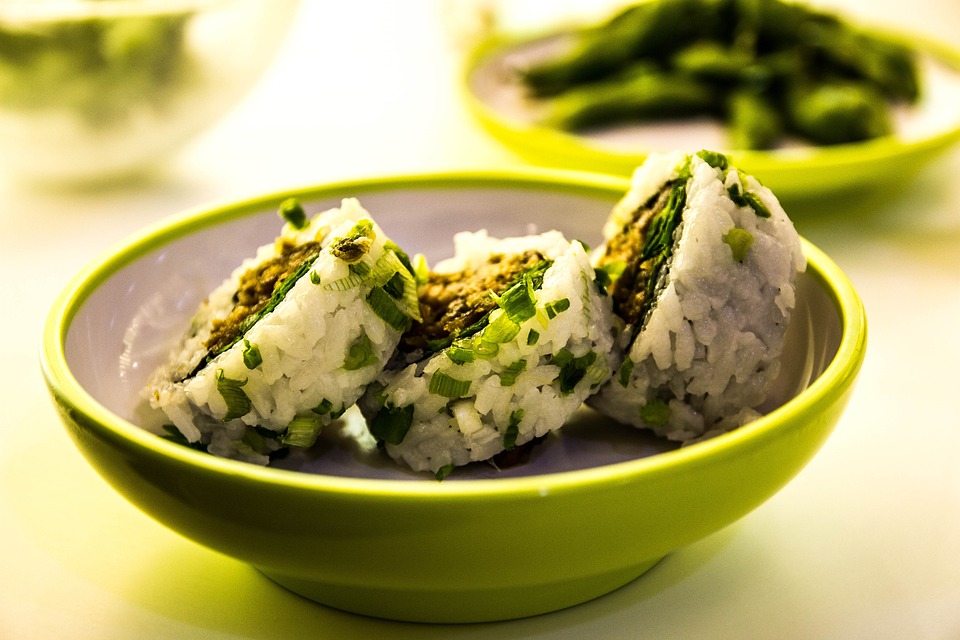 If you like a little bit of spice in Asian food, go for the eggplant sushi. It’s a little spicier than other vegan sushi varieties, made with eggplant strips, chili paste, and garlic. So you get an instant punch of flavors.

The fillings are rolled with rice and nori, so this vegan sushi also contains seaweed.

Eggplant, like many other vegetables, has tremendous benefits. It’s rich in antioxidants that can help prevent cell damage. Of course, the amount is very little in sushi, but it’s still good to know that what you’re eating is healthy.

So can vegans eat sushi? The answer is yes; they can eat vegan sushi. Any other type of sushi may contain seafood or other animal-derived ingredients. Sushi isn’t exactly a pinnacle of healthy food, but in the vegan form it’s not unhealthy either. There’s no frying with oil, so it has minimal fat. 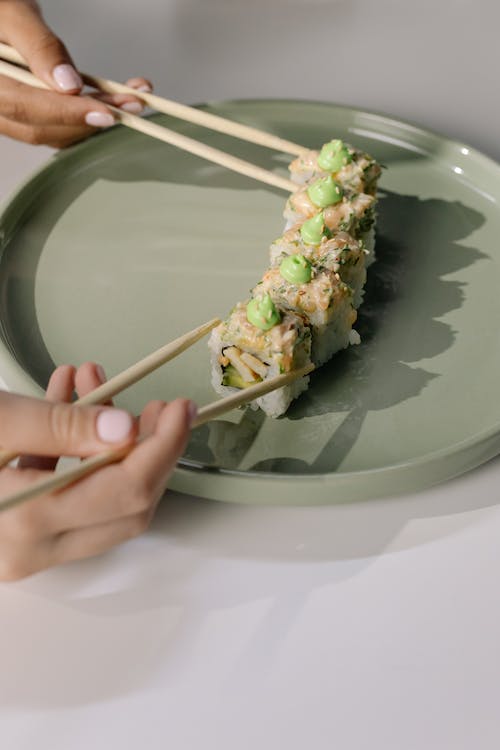